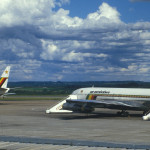 “Our current business strategy is anchored on the need to return to profitability and route network expansion,” Makona told ZBC News.

The airline ditched UK flights in 2012 after creditors threatened to seize its planes over mounting debts.

Zimbabwe’s national carrier has struggled to remain profitable in the face of competition from Ethiopian, Kenyan and South African Airways.

Things can change for the better if it can win the hearts of thousands of Zimbabwean travelers who usually rely on the above airline services for their journeys.