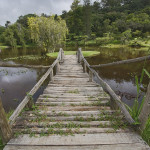 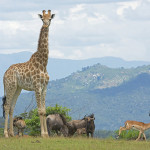 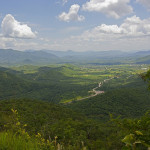 Vumba Mountains Botanical Gardens & Bunga Forest National Park is located very close to Mutare on Zimbabwe’s eastern border with Mozambique.The name (aka Bvumba) is derived from the thick mist that  covers the place most of the time. Vumba is misty, cold and humid for most of the year hence its  uniqueness in a country that is generally hot and dry. Apart from being the Coffee Zone of Zimbabwe, there are more things to see and experience. Here you find a castle, a botanical garden, hotels, lodges, golf courses and a casino. It is ideal for back packers and travellers who want a different taste of hiking and mountain climbing in Zimbabwe.The Castle Beacon is the highest point of the mountain.On clear days one can have good views of Zimbabwe and Mozambique all the way to the Indian Ocean.

There are several indigenous and rare plants within Bunga Forest Botanical Reserve and Vumba Botanical Reserve. Flowers are part and parcel of the Vumba Mountains scenery. It is worth noting that the area has several orchid family (Orchidaceae) plants. Over 79% of the Zimbabwe orchid flowers are from this region. At the top of the mountain, proteas (also known as sugar bushes) flowers grow. There are very few places in the world where you can find them growing naturally. In fact they are only native to some very few Southern African countries. Vumba Proteas are some of the most beautiful indigenous African wild flowers. Vumba is also home to aloe plants. The species found in Zimbabwe include the rare aloe excelsa sometimes referred to as Zimbabwe aloe.The country also has aloe arborescens, which is spread in some few Southern African countries. You can also see the strelitzia flower plant that is only native to the southern parts of Africa.

For those interested in game viewing the place has a fair amount of Zebras, duickers, monkeys and African antelope. This is one area where one can see a blue duiker (cephalophus monticola). These beautiful and gentle animals are mostly found around the Vumba region in Zimbabwe. Their abundance tells you that the place has a lot to offer to humans and wild animals too.

Vumba provides one of the best venues for golfing to tourist. At Leopard Rock, Zimbabwe has one of the best golf resorts by world standards. It is an amazing and challenging 18 hole golf course.

The Castle at Vumba Mountains is a very important landmark. Built by the Seymour-Smiths in the 1940s it adds architectural beauty to a place that is naturally scenic. The castle is now used for public functions.

Those climbing and up the mountains can also double it up with bird watching. With the evergreen outlook, the Vumba Mountains have prolific bird species. The place is rich with a number of birds that are native to Zimbabwe and the neighbouring region. They include Apalis chirindensis (Chirinda Apalis) bird. This bird prefers the area because of the higher altitude. It will only go to the lower valleys if the temperatures drop. This is usually around June and July when the temperatures can fall below zero.The area is also home to the Oreophilais robertsi (Roberts’s warbler, Brier warbler) bird. It is resident to the eastern parts of Zimbabwe. It lives in bushes and wooded areas. The Swynnertonia swynnertoni (Swynnerton’s robin) and Psalidoprocne orientalis (Eastern saw-wing) birds have also been seen in and around Vumba Mountains.

Vumba has some of the best and most inspiring accommodation facilities if you are to Travel Zimbabwe. The hotels and lodges are in good condition and this is one area in Zimbabwe where hotels are of very high standard. The Leopard Rock Hotel has been visited and used by the rich and famous members of the British royal family who visited the Vumba Mountains in 1953.