Hwange National Park is about 15 000 square kilometres  making it Zimbabwe’s largest game park.  Hwange is located in the south western part of Zimbabwe between Bulawayo City and Victoria Falls, close to the Zimbabwe-Botswana border. 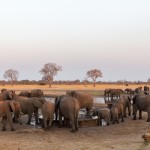 elephants at a water pump 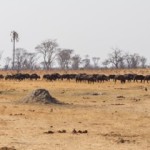 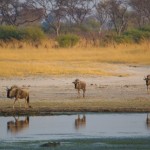 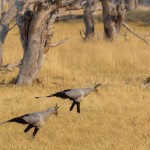 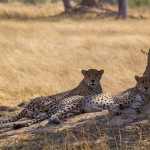 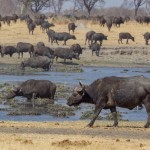 The landscape in Hwange National Park similar to what you see in Victoria Falls, a mixture of Kalahari sands, basalt, plateaus and open grasslands. Wild animals feed on salt pans, grass and different plant species found in the area. 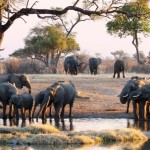 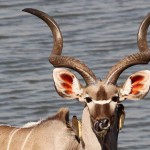 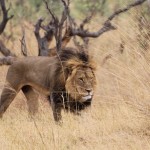 The game park is named after a local Chief Hwange who used to rule the area in the 19th century.  Hwange National Park has 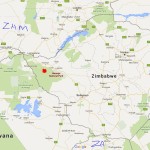 been in existence since 1929. Today the game park has the Zimbabwean charm with its huge herds of African antelope, wild dog, sable, buffalo and one of Africa’s largest elephant population. It also has lion, zebra, hyena and many other African wild animals that include the protected wild   dogs, black backed jackal, bat eared fox, cheetah, hyena, giraffe and pangolin. There are about 500 animal species at Hwange National Park including birds and mammals.

Game viewing is best in drier months when animals gather around small ponds  and salt pans to drink and to feed.  This is between May and November. There are very few animals to see between December and March as they disappear into green forests. Hwange certainly very good for bush camping and wildlife safaris. It is at the centre of old animal migration routes between Botswana and wild Zambezi.

Accommodation: Hwange National Park has many lodges, bush camps, exclusive camps, caravan sites, cottages and guest houses at different locations managed by Zimbabwe National Parks. Hwange Safari Lodge is a popular camp. Planning and bookings should be made in advance before you travel.

Transportation: Most designated roads at Hwange are usable between May and October.  In rain season(November to March), visitors should consult Zimbabwe Parks Authorities to avoid using unsuitable roads. Getting stuck in the muddy is not a good holiday experience. By air, you can fly from different parts of Zimbabwe and South Africa to Victoria Falls  Airport or Hwange Town Airport   where you will then connect by road to Hwange National Park based on your holiday plans. There is a small unlicensed airstrip at the park. Permission is needed to use it.