Great Zimbabwe Ruins; Photos and some simple facts about the ancient city located in Masvingo Zimbabwe. 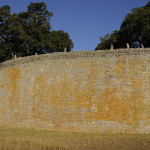 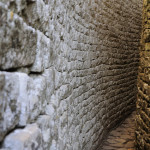 ..was a royal residence 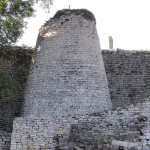 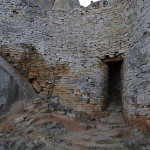 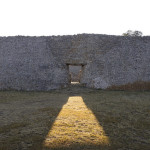 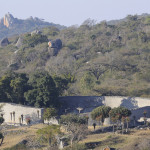 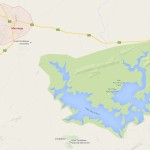 Brief Definition & Background History:  The Shona people called them Dzimbabwe or sacred houses. The construction was done with dry stones without the use of cement. There is no doubt that the construction of these free standing stone walls needed cunning workmanship to accomplish.  It is sometimes refered in popular literature and documentaries as remnants of the ancient civilisations and lost cities. Great Zimbabwe has inspired writers and film makers in different ways. It is the inspiration behind Rider Haggard’s King Solomon’s Mines. It is also the force behind a best-seller – The Sunbird.

The Rise: Great Zimbabwe covers about 1800 acres of land with a dense maze of walls and stone towers. It is the largest ancient stone construction in sub Sahara Africa.The ruins are about 700 years old. The ruins are the capital of an empire where an influential king ruled people living in the vast Zimbabwe plateau.Great Zimbabwe Empire is a manifestation of a thriving Shona African civilisation that existed and flourished centuries before the colonisation of Zimbabwe. With over 20000 inhabitants, the area was the centre of trade between the Zimbabwe plateau people with foreign merchants from as far as China. The rulers decided to built the stone structures  as their wealth and political power increased.

At its peak Great Zimbabwe served as the capital of a kingdom which was about 200 000 square miles. There were close to 200 smaller administrative centres, the ruins of which still continue to exist. They include the beautiful Khami Ruins found in Bulawayo. The wealth and economy of the empire depended on agriculture, mining and long distance trade with the Far East.

Destruction of  site: Early European settlers and fortune seekers ravaged the place in search of buried treasure in the 19th century. For many years the site has been subjected to physical destruction by a number of people whose speculations almost destroyed one of the most important symbols of past and present day Zimbabwe. Great Zimbabwe Ruins’ treasured soapstone birds were among items taken and damaged by treasure hunters. A UNESCO world heritage site since 1986, Great Zimbabwe is regarded as a symbol of ancient African prosperity and civilisation many years before European settlements were established.

pictures by a ashton

German traveller Karl Mauch is the first known European to reach great Zimbabwe in. In his writings his reports supported the belief that Great Zimbabwe and Masvingo was the place where Queen of Sheba and King Solomon of Israel mined gold. Cecil Rhodes and many colonial settlers viewed the ruins as abandoned homes to some Phoenicians or unknown early European travellers, research and facts prove that Great Zimbabwe is none of these. The city was already present by the time Portuguese explorers visited around the 15th century.When they heard about it, the Portuguese travellers thought these were the palaces of Queen of Sheba commissioned after her visit to Solomon. The euro centric narrative ‘justified’ foreign occupation of territories thought to have been once held by non Africans. However, there are several smaller structures scattered throughout Zimbabwe and Southern Africa with similar ceramic and architectural evidence indicating indigenous African origins. In the 20th centuries Zimbabwe African  nationalists and pro-Rhodesians alike used Great Zimbabwe’s mythology to support their ideologies. It was not a surprise in 1972 when a renowned European scientist studying Great Zimbabwe Ruins was deported from what was then Rhodesia for stating that the Great City was built by ancestors of the Zimbabwean Shona tribes. Recent extensive archaeological research by leading European scientists at Great Zimbabwe and other smaller ruins in Zimbabwe have shown that the ancient city was built by indigenous Zimbabweans.

The Great Enclosure is made up of a high wall with a perimeter of smaller walls surrounding it. There are suggestions that this could have been the official residence of the royal families. The walls of the Great Enclosure are about 11 metres high ( about 36,1 feet). It stretches to 250 metres (about820 feet). The walls are 6 metres (20 feet) thick. The Valley Complex is in two forms the lower and upper valley areas. It is believed these valleys were occupied at different periods by different kings. There are other reports that suggest that the valley complex was used as residence by commoners. The Hill Complex is believed to have been used for ceremonial functions and gatherings. Many writers say that the Zimbabwe birds were kept in the Hill Complex.

Designed out of soapstone sculpture, Zimbabwe birds are among the most notable items recovered from Great Zimbabwe. In total there are 8 stone caved birds taken out of the Ruins. The birds are on average about 50cm tall. Today the Zimbabwe bird flies on the national flag. It has been used on many places as a symbol of the country. The birds are widely believed to be fish eagles that are very common in Zimbabwe.

There were  a number of highly valuable artefacts that were found at Great Zimbabwe. These include some stone carvings, African pottery, iron gongs, elaborately deigned ivory pieces, bronze and gold ornaments, crucibles and sheaths. A number of Great Zimbabwe artefacts are displayed at the national museum in Harare. Great Zimbabwe pottery can be seen at Bulawayo museum.