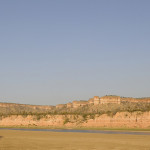 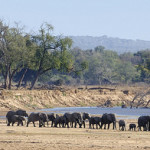 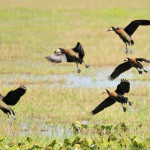 It is about 5000 square kilometres. The park is located in Chiredzi District, Masvingo Province near Zimbabwe’s south eastern border posts . It is south of Eastern Highlands on Zimbabwe- Mozambique border precisely South Eastern Lowveld of Zimbabwe. Many parts of Gonarezhou are in pristine wilderness condition due to the remoteness of the area.  Gonarezhou has semi desert features of lowveld Zimbabwe.   The Mwenezi, Runde and Save(Sabi) rivers pass through the park providing food and water to animals. Gonarezhou was closed to the public in the 1970s and properly reopened in 1994. This was due to the Zimbabwe war until 1980 and Mozambique’s civil war that ended in 1994.

Gonarezhou National Park has so many baobab trees and several rugged stone cliffs including the popular Chilojo Cliffs. Chilojo Cliffs are scenic red sandstone cliffs formed out of erosion. They are close to the Runde river. They look beatiful and most perfect for your holiday photos.

Chipinda pools is one of the most visited sites in the wilderness. Here there are campsites and bush accommodation facilities for travelers. tourists enjoy fishing and wild animals viewing. Elephants and wild are common.

The name ‘Gonarezhou’ is a Shona word meaning elephant tusk. It has large numbers of big tusked elephants, buffalo,  African wild dog, antelope and lion. It is also home to cheetah, hyena, leopard, giraffe, zebra and a number of small and large African antelope including  the rare nyala and suni, a beautiful smaller antelope. Gonarezhou is home to the Zambezi Shark(not found on The Zambezi River). There is plenty goby and bream fish. Several birds species can be observed in the park.

The place is unique as wild animals can move freely into neighbouring Gaza and Kruger National Parks in Mozambique and South Africa respectively.  This was made possible by the creation of the Great Limpopo Transnational Peace Park. The project is managed by Zimbabwe, Mozambique and South Africa parks authorities. They aim to establish the old animal migration routes.  Ultimately this should create a spectacular peace park with over 900 animal species including 150 mammals, 120 reptiles,35 frogs and 50 fish species among many others. If fully implemented The Great Limpopo Transfrontier Park and its surrounding transfrontier conservation area will be Africa and the world’s biggest game park.

note: Chirinda Forest in Chipinge is not too far from Gonarezhou. Chimanimani Mountains are also reachable from here.

photos by a ashton