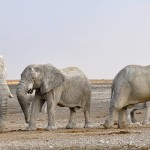 In a case of mistaken identity an Italian father and his son have been killed by an anti-poaching ranger while they were on patrol at Mana Pools National Park, north western Zimbabwe.

Today the Zimbabwe parks and Wildlife Authority has issued a statement that a father and son have been killed while they were tracking poachers  at Mana  Pools National Park.

The pair, Claudio and Massimiliano Chiarelli were confirmed dead on the spot after receiving fatal  gun shot wounds.

A parks official who refused to be named said the two ran into trouble when their car developed  a faulty. They stopped to repair it and that is when park rangers spotted them.

While working as volunteer anti-poaching personnel, they also ran professional hunting business as well as a safari tour service mainly for foreign tourists.

The deceased were citizens of Zimbabwe having been living in the country for over 2 decades.

His death has been described as a huge loss by the hunting fraternity of Zimbabwe.

It is believed the 2 were in thick bushes were they were spotted and killed by rangers who thought they were poachers.