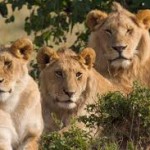 Wild animals from the Save Valley Conservancy area are straying into villages causing a lot of concern to locals whose lives and domestic animals are in danger.

Local farmers have already lost about 350 cattle to lions.

Villagers in Chibuwe area in Chipinge East are now living in fear due to marauding  animals that stray from the unfenced Save Valley Conservancy.

At least 2 domestic animals are being attacked and killed by lions on a day to day bases.

While lions are targeting cattle, people are likely to be injured by buffaloes and elephants which are now an eyesore to the locals.

Local leaders have made appeals to  authorities to deal with the situation before anyone is killed.

The problem has been there since around year 2010 with isolated cases but now the situation has gone out of hand with villagers now fearing for their lives.

Many have since abandoned their daily farming activities fearing they might be attacked by stray wild animals.