Great Zimbabwe Definition: About The Ancient Stone Ruins of Masvingo 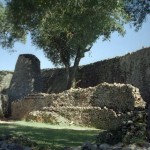 ”Dzimba-dze-mabwe” is the original name of the ancient Great Zimbabwe Ruins. The word dzimba is a Shona word for house.

The dze means of. Mabwe is stones in Shona. So in full it is Houses of Stones.

”Great” was never used in ancient times. It is a modern prefix first used by researchers and historians after discovering that the ruins were a commercial and political command centre for a thriving African empire covering many regions and places in central and southern Africa. There are many smaller ruins scattered throughout southern Africa that might have belonged to subordinate kingdoms.

Great Zimbabwe was sustained by agriculture, international trade with the far east, religion and mining.

Today the ruins are the largest ancient stone construction south of the Sahara. The country Zimbabwe is named after the ruined stone city. Many official and national emblems for example the bird on Zimbabwe flag are derived from Great Zimbabwe.