The Zimbabwe government has deployed special forces, troops and elite police to fight poachers  who have been killing wild animals in the country’s national parks, the Minister of Water and Environment Oppah Muchinguri-Kashiri has said. 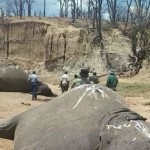 The Minister said she is concerned that a number of poachers are the country’s poorly paid rangers. Many elephants have been poisoned recently at Hwange National Park.

Zimguide.com is reliably informed that these poachers are often duped with as little as $100 payouts for rhino and elephant horns by rogue overseas traffickers.The use of cyanide poison is a sign of inside involvement as outside criminals often prefer to use guns and wire traps. “It’s possible and very likely that a trusted person can secretly poison water holes without raising any suspicions from the wardens”, an anonymous blog user wrote to us.

Security forces will not only cover Hwange as they will also operate in Mana Pools National Park, Matusadona, Chizarira and Gonarezhou National Parks among many other places.

This could be the turning point in the endless war against poaching. The shadowy ivory cartel will likely go underground as  the army mobilise to face them heard on.

Here is how some people have reacted to the news:

1.Wow, recognizing that as a leader in natural resources management, security of our wild life and fauna is important is a great step. Yes indeed, the loss of elephants and other animals to poachers was security of a nation. Chemicals meant for animals were soon going to cause if not already so havoc amongst our people. Now we await to see the living conditions of those charged to deal with these challenges on a daily basis IMPROVE.

2.The Minister has rightly highlighted the collaboration of rangers in poaching due to poor working conditions and salaries. The rank and file Military has also experienced similar poor conditions, irregular payments, and recently were still waiting for their unpaid promised end of year bonuses. What’s to stop hard pressed poor soldiers from joining the ranks of poachers in order to supplement their remuneration?

3.National Parks please be serious , you have thousands of workers some for two years without being paid their wages. This is rubbish to say the least, these people are surviving on poached meat and a lot of illicit deals. Someone must do something now. Parks receives lots of cash from tourist and companies, surely they must not make people slaves in their own country.