Is Zimbabwe Safe to Visit & Travel?

Is it safe for tourists to go to Zimbabwe? According to information just released by the British Foreign Office(Nov 2015), Southern Africa is a safe travel destination. (Enlarge the image to see African country destinations listed in safe, moderate and dangerous categories.) 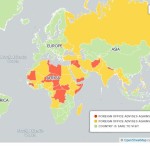 The safe destination tag is welcome news to SADC regional countries(including Zimbabwe) who are often in the shadows of their northern counterparts in terms of tourism and hospitality numbers.

Most African countries north of the equator are considered dangerous and unsafe due to civil wars and religious tensions in the regions. Tourist have been attacked and killed causing many countries in the West to blacklist popular destinations like Egypt, Kenya, Tunisia and Nigeria.

ZimGuide.com recently stated that Zimbabwe and its neighbours can double and treble tourist numbers if there was proper marketing of our resorts.

Zimbabwe has excellent Safari Paces like Victoria Falls, Hwange and Mana Pools National Park. Being in Africa’s Green Zone it has to seize the moment and claim its place under the sun.

As millions of tourists from the northern hemisphere look for sunny destinations in the coming colder months , Zimbabwe and SADC countries should be ready to step in as best alternative safari destinations.