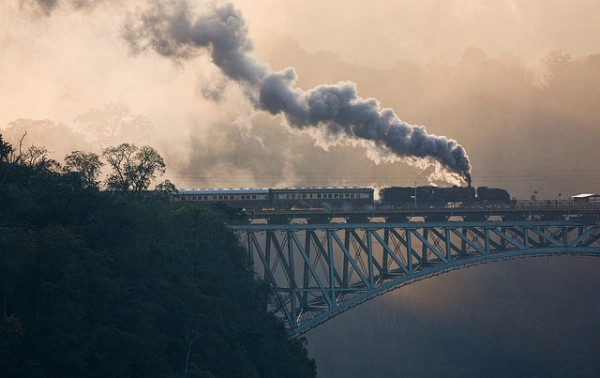 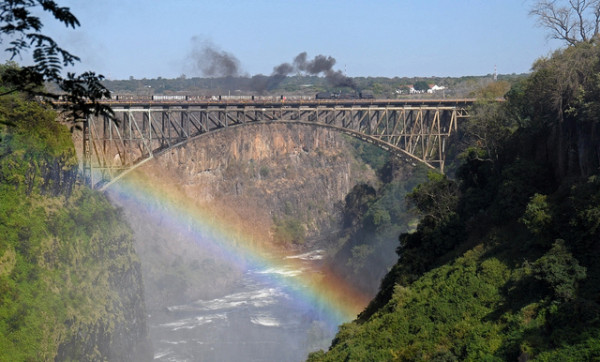 . It was was completed in 1905 and officially opened on 12th of September in the same year by Professor George Darwin, Charles Darwin’s son . It was constructed to fulfill Cecil John Rhodes’s dream of a Cape to Cairo railway line linking British occupied territories in Africa.

Rhodes never visited Victoria Falls and passed away before the bridge project was even started. Victoria Falls Bridge was designed and constructed in the United Kingdom by Cleveland Bridge and Engineering Company. Different parts of the parabolic arch design were then transported by ship to the Mozambican coastal city of Beira. From here it was then carried on rails to Victoria Falls.

Victoria Falls Bridge was affected by the Zimbabwe liberation war and it was closed on many times in the 1970s.  In 1975 Zimbabwe nationalists and Rhodesian representatives failed to reach peace agreement after 10 hours of negotiations. At Zimbabwe’s independence in 1980, the bridge was opened on full time basis for tourism and transportation purposes.

Today Victoria Falls Bridge is a one of the main attractions at Victoria Falls. Visitors are given tours mainly highlighting the history of the bridge. For adrenaline junkies this is also the location of Shear water bungee jumping, zip-line and bungee swing.

In 2011 an Australian tourist was a lucky survivor after her bungee code snapped causing a 24 metres fall into the crocodile infested Zambezi river. Safety measures have been robustly improved and thousands of bungee jumps have been safely done with no accidents. Zimbabwe and Zambia do regular engineering maintenance to make sure the bridge does not pose any risks to people.